I invite you to browse the photo galleries on this page, which include a selection of the images from several of my ongoing projects.

The featured project, “Visible, Yet Unseen”, contains my abstract photographs exploring a world of shapes, patterns, colors, and textures. These attributes are visible, yet unseen. You see only the things around you—people, places, and objects. I see things differently.

Each of my photographs is available for purchase as an open-edition print or to license. Selected photographs also are available as signed limited-edition fine art prints or as a handmade print using the vintage platinum/palladium process.

Be sure to read my artist’s statement, see where my photographs are being exhibited, get information about my photography workshops, or just learn more about my work.

And connect with me through my blog, where I write about what I’m photographing, or on Facebook and Instagram. I’d love to hear from you!

You see only the things around you—people, places, and objects. With a compact camera, smartphone, Facebook, and Instagram, your photographs document “who was there and what I ate”. You post, tag, pin and tweet in a world of personal photojournalism shared through social media.

I see things differently—a world of shapes, patterns, colors, and textures. My photographs bring these attributes into view. When something is observed with no context, its separate existence ends and its characteristics become the focus. Now you see what is visible, yet unseen, and you are drawn into the intimate dialogue with my world.

Through my work I expose you to a different kind of image. Your experience is with photography that is about something. My photographs invite you to connect with a subject you may not immediately see and challenge you to find meaning in a purely abstract expression.

Modern abstract artist Paul Klee wrote, “Art does not reproduce the visible; rather, it makes visible.” This is the essence of fine art photography—a visual image created by the artist as photographer.

In 2010, my print “Cattail” won the prestigious Gold Medal award in the 97th Annual Gold Medal Exhibition at Detroit’s historic Scarab Club. Since its founding in 1907 by a group of artists and art lovers, the Scarab Club has been active in the Detroit arts community. The Gold Medal is the Scarab Club’s highest and most esteemed prize presented to its members, and this was the first time it was awarded to a photographer.

The winning image of a cattail was taken in the studio with a single strobe light and a black background.

Check back regularly for updates on new exhibitions featuring my fine art photography.

In this modern age of digital cameras and highly representational imagery, it is fitting that a growing number of artists and photographers are rediscovering the art and craft embodied in vintage techniques from the early days of photography.

This exhibition featured three artists and photographers using vintage techniques to create work that is distinctive and very different from the photographs typically seen by the public. Working independently to explore the boundaries of creativity made possible with these “alternative” processes, they brought together in one exhibition a wide variety of photographs to demonstrate that hand-crafted photography has a vibrant future in the digital age.

“Pas de Deux” is the French term for a dance with two performers, especially in ballet. By dancing with a partner, the woman can jump higher, take positions she would never be able to on her own, and “float” about the stage as she is carried by her partner. With a dancing partner, the man can extend his line and show off his strength. A pas de deux also describes an intricate relationship or activity involving two parties or things.

We selected pairs of our works for this exhibition which, when seen together, are enhanced by each other as in a pas de deux. Each pairing is accompanied by a single word intended to evoke in the viewer’s mind a relationship between the works and to be a point at which to enter the conversation taking place. We invite you to contemplate each pair and make your own connections.

Two of my photographs are included in the recently published Volume 21 of Studio Visit magazine, among a selection of international artists chosen by Dina Deitsch, Senior Curator at the deCordova Sculpture Park and Museum in Lincoln, MA. Studio Visit is a series of juried artist books produced by the publishers of New American Paintings and sent to curators and gallerists throughout the country as well as collectors and art enthusiasts.

The purpose of the Annual is to provide Scarab Club member artists and poets an opportunity to have their work published in book form. My work appears in all four published volumes, with Volume 5 to be published this Fall. 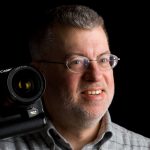 Late in a career in business, I discovered a passion for the fine art photograph and, through extensive personal study, developed my skills and personal vision as a photographer. In the process, I came to a deep understanding of how the photographer, the camera, and a subject intersect to create a compelling image.

People see the world in different ways and respond to it according to their own personality and experiences. Instead of trying to capture the world in the same ways that others see it, I express my unique viewpoint. By mastering the tools provided by the camera, I create photographs that portray a personal view of the world and communicate what I see to others. These are the images that captivate, inspire, and challenge me because they come from a place that is inside and personal to the photographer.

My photographs have been exhibited in many galleries in the Detroit area, as well as nationally and internationally, and they are in several private collections. I am a member of Professional Photographers of America, and I work from my studio in Hazel Park, Michigan.

Whether you are a prospective buyer, an exhibitor, or just want to know more about my photographs, please feel free to get in touch with me.